Our our last day in San Miguel de Allende, Mexico, I was lucky enough to be able to join the Urban Sketchers San Miguel de Allende on their weekly outing. This time we met in the San Antonio Church and plaza. Children were also off school so the plaza was very busy and active. The children were especially interested in what we were doing and a few posed for one of the sketchers. 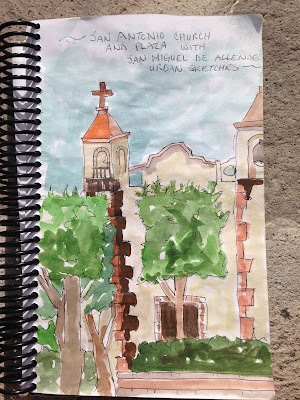 I decided to be brave and try some of the people. I thought these 3 men were interested and the two "bookends" were sketchers. The middle person was waiting for his child to play for awhile and then decided to leave when he felt me looking at him. Sketching "sketchers" works so much better as you know they will be fairly still for awhile. 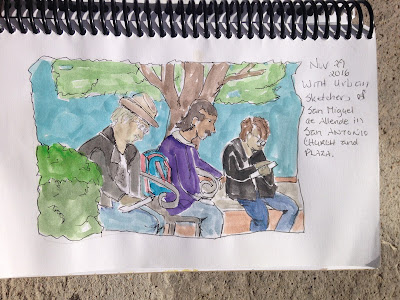 Galleries and Shows coming up

Karen Oliver
Please check out my website at www.KarenOliversFineArt.com My art is all about colour. I love colour! I see colour in art before I see the "thing". I love the unpredictability of water colour and the boldness of acrylic paint. I have always been creative and painting has been my latest and most passionate outlet. I can't believe how much there is to learn and more importantly, how much there is to experience. I can be contacted at Karen.Oliver(use @ symbol)Outlook.com It keeps spam away if I don't use the symbol in my address on the blog. The original artwork in this blog may not be reproduced without the expressed written permission of the artist - being myself.

To comment, if you look at the bottom of each post you will see the date and time, etc along with Comments--if you click on that it will take you to another page where you can see what others have said--and there you will see a box (usually on the top right) that you can type your own comments in for others to read) Then click the button beside name and put in your name....Click the big orange box that says Submit Comment and voila---you have just commented on your first blog!!